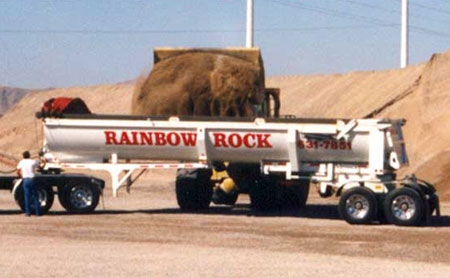 Multiple applications Clement’s rock trailers standard body shell with 45-inch sides, is made of 1/4-inch AR400, a very tough steel that makes the trailer capable of withstanding severe impact loads, as well as normally anticipated loads such as sand, gravel, coal, scrap, demolition, etc. With the inclusion of Clement’s patened “Bridger” sliding tandem, much larger payloads are possible with a much shorter trailer.

Proven on hundreds of thousands of trailers, 25,000-lb. Meritor axles feature common inner and outer bearings. Combined with Meritor’s parallel spindle, both axle and bearing life are substantially increased. With hub-piloted wheels there are no inner nuts and all nuts have right-hand threads. Maintenance time and costs are reduced

The Clement Quarter Frame’s standard gate has a minimum 81-inch opening that improves discharge. Mud flaps are attached to the tailgate to reduce flap damage. Barn door tailgates are optional

With an inverted cylinder there’s no doghouse to interfere with the load. Since the kingpin is located forward, the bridge length is longer allowing greater gross weight. An inverted cylinder has no ledges where dirt can collect and contaminate the system. Because the cylinder is externally mounted, it is easier to service and faster to remove.

Simple in Design… To dump the load over the rear tandem, both axles of the trailer are locked. The trailer can then be moved backward, positioning the axles correctly for dumping. After locking the tandem, the trailer can be dumped as any other end dump. The “Bridger” is a viable option for any length Clement frame or frameless end dump trailer.
SPECIFICATIONS