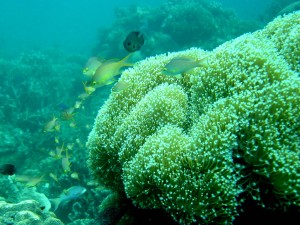 A decommissioned offshore oil rig is one that an oil company no longer uses, however, has not been removed from the ocean floor. The cost of removal is $3 million, and many environmental groups claim that the environment would suffer if the artificial reefs that form around them while in use were destroyed during the removal.

A 1970s federal law requires that the owner of an oil and gas platform is required to remove it for many reasons:

The removal argument is compelling, however, environmentalists have promoted initiatives called Rig to Reef programs that have successfully led to the enactment of state laws that override the federal law and allow a platform to remain in place following the completion of an oil or gas project.

The reason is to protect the coral and marine life population that grows around a platform during its use.

However, according to the National Oceanic and Atmospheric Administration, in order for a coral reef to form it requires at least approximately 100,000 years to fully form. A new marine population that grows around an oil or gas rig structure is comparatively temporary.

It can be an expensive operation to remove an oil or gas platform, however, the marine life that has developed around the structure has had relatively little time to form and mature in comparison to permanent ecosystems that grow around natural ocean structures, such as the sea floor and existing coral reefs.

Some experts estimate that approximately 8,300 oil and gas rigs currently exist. It could pose a problem of over-proliferation if the structures’ removal were not adequately monitored.

The advantages of removing an offshore oil or gas rig may outweigh the benefits of allowing them to remain on the ocean floor.

A metal platform could naturally degrade in the ocean, which would eliminate the necessity of removing it. While metal decomposes in sea water more quickly than on land, it still must pass through the rust process and requires a lengthy time period to decompose, which would pose risks of obstruction and chemical emission. The invasive species could also alter the ecosystem and conditions for native sea-life that may become threatened in an artificial environment.