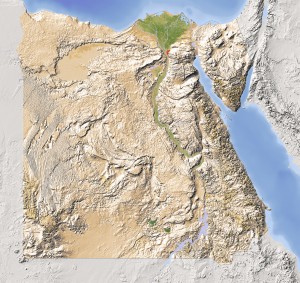 One of the largest natural gas fields in the world has been discovered just off the coast of Egypt. The oil field, Zohr, is nearly 5,000 feet below the water and covers an area of roughly 40 square miles. Zohr is estimated to hold as much as 30 trillion cubic feet of gas, the equivalent of 5.5 billion barrels of oil. Egypt has been known to be an oil rich country for many decades, and is presently the largest oil producer in Africa that is not also a member of OPEC. However, Egypt also consumes a fifth of the oil produced in the continent.

The area in which Zohr has been discovered is under Eni’s concession rights. Eni negotiated a deal with Egypt worth approximately $2 billion, which allowed it to pursue potential oil and natural gas deposits throughout the Mediterranean, Nile Delta, Gulf of Suez and Sinai. As the Zohr field is nestled safely within the country’s territory, it falls under Eni’s negotiations. It is unknown how much of the area has been explored by Eni, and there is the potential for additional oil discoveries. And while Eni strongly believes that the Zohr field is a “super giant” 40 square miles in size, it is not yet known with certainty how large the oil field truly is. Exploration of the oil field is continuing.

Eni has been operating in Egypt since 1954, though under its subsidiary company IEOC. On a daily level, Eni produces 200,000 barrels of oil equivalent within the country, and remains the major hydrocarbon producer in the nation. Rights to the Zohr field was purchased directly through Egypt’s oil ministry by the multinational Italian corporation.

With natural gas demand as high as Egypt’s, the Zohr discovery could be substantially beneficial for the country’s economy as a whole, not just its oil production and exports. The gas discovered in Zohr could potentially cover the entire country’s needs for decades according to Eni, lowering localized gas and oil prices and improving the country’s financial situation. Though the exploration of any new gas field takes time — especially a gas field located 120 miles off the coast — Eni does not anticipate delays and is eager to get started.

Zohr is an impressive find, but it isn’t the only large natural gas find that the company has experienced in recent years. In 2011, Eni discovered the Mamba field in Mozambique, which was first estimated to hold approximately 15 trillion cubic feet of natural gas but was later discovered to have up to 22.5 trillion cubic feet in 2011.  It is possible that Zohr could, too, exceed the estimates of Eni’s analysts.