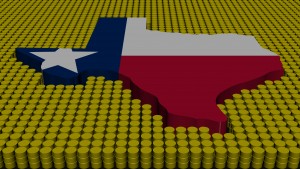 Recent reports show that Texas oil wells are continuing to produce oil at a record pace and will likely continue to do so for some time. With dropping oil prices, it may have been expected that oil companies would pull back on their operations and begin producing less oil to capture a higher cost per barrel. But a strategy of continuing the domestic product surplus may be more beneficial long-term to both Texas oil producing companies and the local economic picture.

The Baker Hughes Rig Count, released on a weekly basis as a count of how many oil rigs are currently in service, is often used as a benchmark to determine current oil production. Though the price of oil has been falling steadily this year, the baker Hughes Rig Count has been going up in Texas, indicating that Texan oil producers are increasing their drilling rather than slowing down. The State of Texas has recently increased its rig count by eight rigs, showing faith in the market. Comparatively, the nation as a whole only increased its rig count by nineteen, showing that Texas is growing its oil production at a rate much higher than the rest of the country. Drilling rig counts also have another benefit: they can be used to extrapolate jobs that have been created within the oil industry.

Falling Prices in a Rising Market

Some might have expected oil production to slow to counter the falling prices in the oil market, but that would only work if the low prices of crude oil were organically rather than artificially derived. The oil market has been depressed because of a flood of surplus oil from foreign countries, which have been introduced intentionally to drive domestic oil producers out of the market. Essentially, reducing oil output would be exactly what competitors intended. By increasing oil output instead, the Texas companies can grow at speeds appropriate to the Texas oil reserves while still producing affordable domestic oil for the country to use. Though the companies may make less money per barrel, they can still grow their revenue through the amount of barrels they sell.

More importantly, they avoid downsizing their operations, which would ultimately leave the nation reliant on foreign oil once the prices stabilize. Growing oil production in Texas has a direct impact on the local economy in the state, creating jobs and bringing money into the each area that has an oil rig. Downsizing or slowing operations would doubtlessly have a negative impact on these oil-producing cities.

Soon, Texas will be producing enough oil that they will exceed their 1972 production record. Though some economists might have predicted that oil production would slow down in the wake of oil price reductions, the Texan strategy of producing more oil ultimately makes more sense. As long as a profit can still be returned from the sales, producing more oil will secure the domestic market, outpace foreign oil companies and still generate revenue through volume.