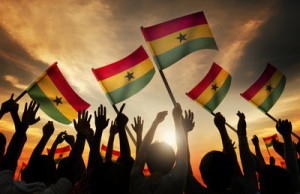 Known as the TEN oil fields, the offshore fields of Tweneboa, Enyenra, and Ntomme in Ghana will be sending hundreds of thousands of barrels of oil out of the country through Shell. Royal Dutch Shell will be the first business to purchase the oil produced in the TEN fields, a project that has cost approximately $5 billion. When the project is entirely completed, it’s expected to  produce 80,000 barrels of oil a day.

A Group Effort in Ghana

The Ghana oil fields have been developed with approval by the Government of Ghana over the course of just a few years. The project involved a partnership between the Ghana National Petroleum Corporation, Tullow, Anadarko, Kosmos, and PetroSA. The initial discovery of the TEN oil fields occurred in 2009. It’s believed that this oil production will be substantially beneficial to Ghana, as it allows them to not only fulfill their own energy needs but also export oil for profit.

Ghana is a country that is relatively new to oil production. In fact, it only began producing commercial oil in December 2010, when the first oil was produced through the Jubilee field. Since then, the country has been taking action to explore its potential oil wealth. The country has spent a considerable amount of time investigating is potential oil resources and creating developments that will be able to produce oil in the most efficient way possible. The TEN oil fields will make up the second oil development in Ghana, making it an important experiment. Not only is the country optimistic about the development’s success, but the project has come in both on budget and on time so far.

In total, it’s believed that the TEN fields will be able to produce over 300 million barrels of fossil fuel, and that the process should take approximately 20 years. Both natural gas and oil will be produced, at approximately 80% oil and 20% gas. For Ghana, this oil will be able to drive its economic growth and potentially increase the region’s stability. Oil and natural gas are being used throughout the globe in order to improve economic stability and secure a better energy future. Tiger General, LLC has prided itself on supporting local businesses and its community since 1925. Contact Tiger General, LLC today to learn more about their affordable oil field equipment and rock solid support.