The North Dakota state Department of Health is proposing an increase on the radioactivity levels of technologically enhanced naturally occurring radioactive material, or TENORM as it is more commonly known. These rules have yet to take effect; there are still three public hearings scheduled for early 2015. The department of health is also accepting any public comments up until Jan 31st.

The proposed rule change will up the amount of radioactivity from 5 picocuries up to 50 picocuries allowed. This change has been deemed as having little to no impact on the environment. A study was conducted by Argonne National Lab in order to investigate the impact of this TENORM waste to the environment in an effort to determine what acceptable levels would and should be.

Inconsistency in the Rules from State to State

There is currently a high level of inconsistency in the rules governing TENORM and how it can be handled. While North Dakota has previously only allowed waste of 5 picocuries or less to be placed in a landfill, other states allowed much higher levels. California and Colorado allow TENORM with levels of 1,800 and 2,000 picocuries per gram. Other states like Texas, Montana and Minnesota are more conservative in what they allow sticking to 30 picocuries per gram.

These seemingly arbitrary limits were what prompted the health department to engage Argonne National Lab to perform the study.

In order to determine what an acceptable level would be, the lab began by looking at internationally accepted amounts of radiation dosage. Currently the international recommended standard for dose is 100 millirem per year for workers who may be exposed to radiation.

To give some meaning to that number, the amount of dose that a person receives from a single x-ray can be as high as 70 millirem per year. Cross country air travel can give a person a dose of about 5 millirem per trip.

The study concluded that a landfill worker who was exposed to waste of 51.6 picocurie per gram would get the 100 millirem dose, thus prompting the 50 millirem per gram limit. 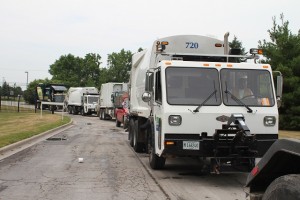 Currently all waste over 5 picocuries created in North Dakota has to be trucked out of state to waste disposal facilities. The high cost of transporting radioactive waste by truck, coupled with the cost of the waste disposal itself has led to illegal dumping of waste in state. A filter sock that costs about $1.60 to purchase can have an out of state disposal cost of nearly $600 in some cases.

Because of this increase in illegal dumping, critics of the proposal feel that not enough will be done to track the amounts of waste being dumped at landfills. They feel this lack of accountability will lead to irresponsible dumping and environmental hazards.

Currently the proposal limits the amount of TENORM that a landfill can accept. 25,000 tons of TENORM per year is the proposed limit, and this waste cannot be accepted at Municipal landfills. Qualified waste disposal facilities will be required to bury TENORM 10 feet below the top of the closed landfill.

It is still undetermined whether the new rules will actually save any costs for oil and gas companies. The reduction in trucking costs may be offset by the overhead generated in testing, segregating and tracking waste materials. It should still be considered a step in the right direction. More reasonable and consistent disposal laws will only help to normalize handling of this waste in the future.