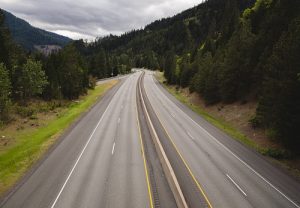 In our last blog post, we talked about the early beginnings of the oil industry. World War I changed the world forever and ushered in a new era of modern technologies, many of which needed fuel. The international demand for oil skyrocketed, and private companies the world over scrambled to stake their claim.

Military and civil defense demanded oil, which became even more important following the Second World War, and the new president understood this more than most.

The Birth of the Interstate

In the late summer of 1919, less than year after World War I came to an end, a young army officer arrived in San Francisco after a grueling excursion from his base in Maryland. His convoy traversed America’s bumpy backroads for a staggering 62 days. It was a miserable experience the young soldier would not forget. That soldier was future five-star general and U.S. President Dwight D. Eisenhower. His arduous cross-country roadtrip would be the impetus for the first Interstate highway system.

We take them for granted every day. These highways are part of our daily commutes or trips to the mall. However, before Eisenhower’s great project, road travel wasn’t nearly as easy. Today, it takes about four to five days to comfortably drive coast to coast, but when Eisenhower made the trip nearly 100 years ago, it took 12 times as long.

Although it’s used for daily commutes and family vacations, the Interstate’s initial purpose was, among others, for civil defense. Following World War II and the rise of the Cold War, the American government needed a quick way to mobilize troops and equipment. Through the Interstate system, these convoys could quickly move about the country.

Of course, in order to mobilize troops and military weaponry, they needed fuel. Prior to the World Wars, petroleum was not seen as a practical fuel source for transportation. However, as the Interstate took shape, it became clear that fossil fuel was essential to military operations.

As the Interstate’s purpose began to shift from civil defense to civilian travel, the number of cars on the road exploded, solidifying petroleum’s essentiality to the American way of life.

Reliable trucks, whether on the Interstate or the oilfield, are the backbone of any operation. Fill out the Tiger General Truck Inquiry Form to find your perfect equipment.