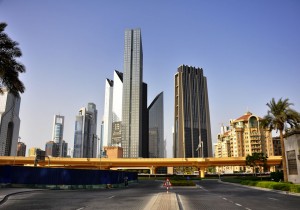 A city built upon oil, Dubai first began hitting the papers nearly a decade ago due to its aggressive expansion into tourism and entertainment industries. While the oil reserves in Dubai, the largest city in the UAE, are said to approach 4 billion barrels, there may be a time when the oil industry in Dubai falters. To that end a significant amount of the oil money brought into the UAE has been reinvested in Dubai’s hotels, attractions and theme parks. Luckily, Dubai may not have to call upon these backup plans just yet.

Dubai Remains Stable in the Face of Political Unrest

Dubai has been described as “part Arab, part Indian and part Disneyland.” This diversification may prove to be a wise move for the UAE, as other major oil produces have been experiencing continued political and economic unrest. Despite this, Dubai remained economically stable and has even grown in the past year. The stability of Dubai ensures that its oil industry can continue to grow and thrive. In fact, some companies have been moving their workers from Iraq into Dubai following these issues.

There has been a steady increase in crude oil prices throughout 2014. In particular, crude oil prices have spiked as of June 2014 following political issues in Iraq, which have not significantly affected Dubai. In fact, Dubai reports that a new oilfield is being developed that could begin production as early as 2015. The increased issues for other major oil producers may ultimately increase the financial success of Dubai and the rest of the UAE.

As crude oil prices increase, so do the gas prices across the United States. These prices are expected to remain high for some time due to the political unrest felt in Iraq. But that does not mean that the United States will need to rely on the UAE or on Dubai for its oil. The United States has been moving away from foreign oil for some time. Today, the majority of crude oil is being recovered domestically rather than purchased abroad. If the United States can continue its emphasis on domestic oil production, the effects of the Middle East turmoil may not be significant.

Dubai remains a strong and growing city and the increased political instability in the Middle East may have only strengthened the UAE. Crude oil prices will rise as the political problems in Iraq continue, and this may promote Dubai’s growth.

This may have an impact on the rest of the world, but it need not have a negative impact on the United States. The United States has been slowly reducing its reliance on foreign oil and, for the first time in two decades, is currently producing more oil domestically than it is sourcing from abroad. Should the global political unrest worsen and foreign prices continue to rise, the United States may simply find itself relying on a stronger domestic oil industry.