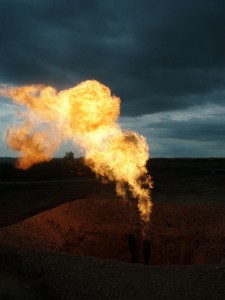 Flaring is a controlled burn of natural gas that can be trapped with crude oil, caused by petroleum producers. It happens in wells drilled for natural gas, as well as during fracking.

Many misconceptions surround flaring. First among them is that the natural gas that is being burnt off is somehow wasted. A second misconception is that this burning is harmful to the environment and contributes to climate change.

Flaring is safe and necessary. This process helps to reduce dangerous gasses.

Sour Gas: Natural gas comes in many forms depending on how it is found. Not all of the gas that is found is actually useable for fuel. Often, natural gas called “sour” gas, has chemicals in it that make it unusable as a fuel source.

A harmful chemical, hydrogen sulfide, can be dissolved in natural gas. In small amounts this chemical can add a rotten smell to gas. In higher amounts, it is actually toxic. In some places, up to a third of the gas produced can be sour gas.

When possible, this gas is captured during the extraction process and processed to be used as fuel. That is not always an option.

Flaring Off Sour Gas: The first reason flaring is used is to dispose of sour gas. Typically when there are large volumes of hydrogen sulfide in natural gas, it cannot be safely extracted.

To dispose of this gas, it is burned off. When the gas is burned, the hydrogen is converted into water and the sulfur becomes sulfur dioxide.

Well Test Flaring: Sometimes during the drilling of oil and natural gas wells, it is necessary to flare for content testing. Flaring during drilling is used as a way to determine the types of gas and oil in the well.

Flaring may not be necessary if the well site is close enough to a pipeline where testing occurs. This process is called in-line testing; it can happen at the processing facility.

If this is an exploratory well, flaring must be done to determine what equipment is needed to extract the gas and oil safely and properly.

Production Flaring: During the extraction of oil and gas, it may be necessary to flare for a few reasons. Sometimes chemicals, mud or fracking fluids can be contaminated with natural gas. This requires flaring to remove the gas from these waste products.

Flaring can also be necessary if drilling, production, processing or pipelining releases natural gas which cannot be processed or captured.

The truth is, scientific studies have shown that methane can be up to twenty times more harmful. Methane is the major component of natural gas; it is vented into the atmosphere.

Flaring is important because it produces less net greenhouse gases. This makes it an important part of keeping the environment cleaner, when all is said and done.