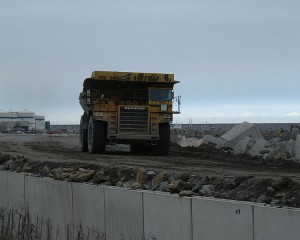 A recent technology called Autonomous Haulage System (AHS), developed by Komatsu, has allowed for dump trucks and construction vehicles to be controlled and driven remotely through GPS and satellite technology. Information on a vehicle’s target course and speed is sent wirelessly to a team of men at a remote operations center. The team of men, usually no more than 4 workers, analyzes this information and alters the trucks speed or route accordingly. A computer determines the route that a truck takes in AHS automatically. The computer optimizes the truck’s route by choosing the shortest route possible. This, in turn, saves money of fuel and maximizes total labor time.

Why Was AHS Developed?

How Much Of A Threat To Jobs Is AHS?

AHS technology is very young and unproven. Most construction companies are slow to adapt to this new technology because of how foreign and progressive it is. No one wants to invest in AHS since the cost vs. benefits are still unknown. So, as of now, traditional driver jobs are not in jeopardy. However, going forward if more companies adopt to AHS, there’s no doubt that traditional driver jobs will be in danger of extinction.

Having said that, there is no sign that machines will automate other roles on a construction site. Roles like a roller, dozer, excavator, and grader will remain manually operated for the foreseeable future. So, it would be wise for current construction workers to become “all-rounders” and become skilled in multiple facets of construction.