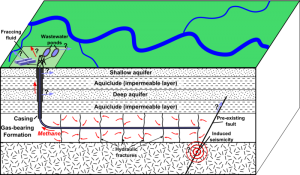 For those who don’t know, hydraulic fracturing or “hydrofracking” is the process of injecting millions of gallons of water at an extremely high pressure into dried up oil and gas wells. Some of these wells can be as deep as 10,000 feet. These highly pressurized mixtures of water and chemicals breaks up the rock formations that contain high quantities of natural gas. States that are commonly known for their hydrofracking practices are New York, Pennsylvania, West Virginia and Ohio. Hydrofracking has been around for many years but not until recently has the government begun to try to stick it’s nose in the industry’s business via intense regulation.In today’s post, we wanted to highlight some of the pros hydrofracking brings to the people in the industry and the communities they represent.

The Advantages Of Hydrofracking

Overall, hydrofracking is a safe process when done in a controlled environment with proper supervision and precautions. It’s important to know all of the facts before claiming that these processes are harmful to the environment and “draining the world’s water supply.” Hydrofracking is instrumental to obtaining the natural resources that we need to survive everyday!

6 responses to “The Pros Of Hydrofracking”